Bangalore, January 30: Chief Minister Basavaraj Bommai on Sunday paid tribute to the father of the nation, Mahatama Gandhi, by adorning his statue in front of Vidhana Soudha and also offered floral tributes to a portrait of Gandhi kept in front of the statue on the occasion of his anniversary of death, which is also celebrated as Martyrs’ Day. 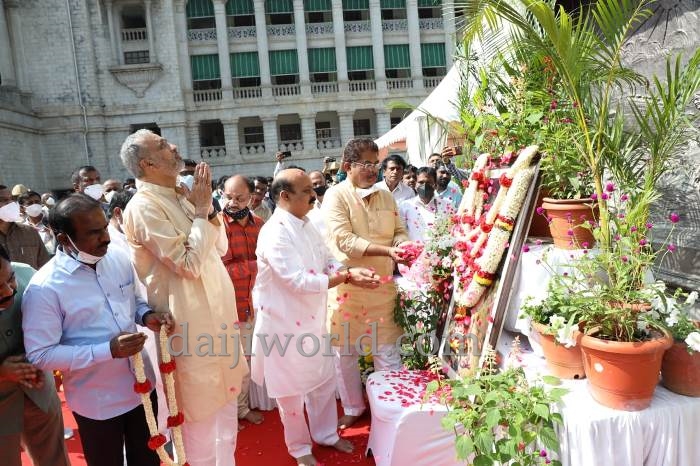 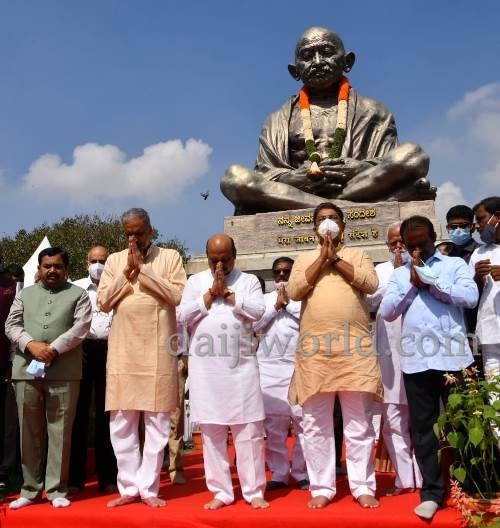 Bommai and all the dignitaries observed two minutes of silence in tribute to the father of the nation.

Speaking later to media representatives, the chief minister said that Gandhi was a great leader who practiced what he preached and espoused truth, non-violence and peace as the principles of his life.

Bommai took the opportunity to congratulate Prime Minister Narendra Modi by mentioning that the Union government follows the teachings of Gandhi such as Grama Swaraj and decentralization of administration besides adopting “Sabka Saath, Sabka Vikas , Sabka Vishwas” and self-reliance or Atmanirbharata.

Responding to questions, he said he offered to hold discussions with the chief police officer and the city police commissioner and senior officials on the toe policy adopted by the police in order to arrive at a comprehensive review and adopt a rational policy that will eliminate unnecessary inconvenience and hardship to the public.

On another question about the request from cinema owners and film distributors to allow 100% occupancy, the Chief Minister said he would consult with the Technical Advisory Committee and his cabinet colleagues on the feasibility of remove the 50% occupancy standard. “We have to look into the matter and make an appropriate decision,” he said.